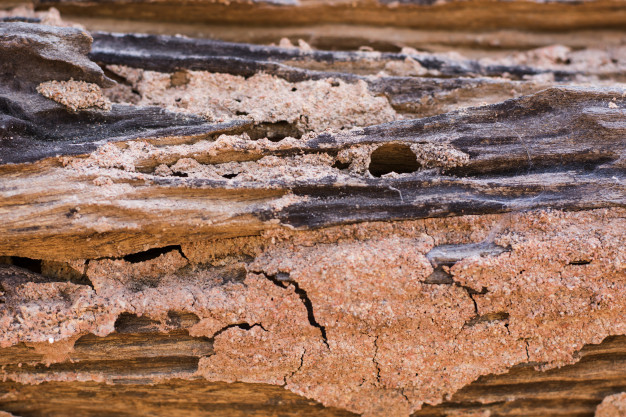 Termites, the bane of all homeowners! Who doesn’t dread the thought of these secretive little wood-munchers silently tunnelling into the vital timber framework of their homes? Termite attacks on buildings usually stem from a nest underground. The pests build mud galleries to hide and enable them to travel unseen over walls or piers to attack timber and timber products in buildings.

While the nests are usually on the outside of a building’s perimeter, there are times when a nest may be buried in the ground directly underneath it. Termites can enter a building through wall cavities, cracks in mortar, block walls, or concrete slabs, and voids next to service entry points.

A video released on Facebook by Laguna Pest Control in Queensland shows a graphic example of how termites can infest a building and do damage. The company’s pest inspector, Jay, says he was called to a termite eradication job on a suspended slab garage. A few years ago it had been attacked by termites in one corner and another pest controller treated the active termites, then did an external perimeter treatment around it. But all was not well.

We use the latest tools and products available to provide effective termite treatments. Termites in our Geelong region are unique and require specialist knowledge to treat them successfully.

A Couple of Years Later

The client found something a bit suspicious and called Jay in for an inspection a couple of years later. “I came along, and we did an inspection on this house,” he says in the video.
What he found was termite workings and termite mudding on a wooden beam coming out from a pole plate and straight up into the framework of the garage.

Core-filled blockwork means the blocks, which are empty in the middle, are filled with concrete to protect against termite attack. So Jay needed to know what was going on behind the wall, which was a cavity.

“We couldn’t get into it, so I got a concrete cutter in and cut an access hatch for us to get in there and see what was going on,” he says. The first thing Jay saw was that the wall was not core-filled, so there was plenty of access for termites to make their way up into the timbers.

“But what was really cool was ‘Bingo!’ A big termite nest inside.”

The video clearly shows a large termite mound directly beneath the garage. It was the perfect environment for termites to set up shop and thrive: moisture, warmth, darkness and timber framework that the termites had destroyed.

At Acacia Pest Control in Geelong, we stay up-to-date with all the latest prevention and control techniques and innovations to help protect your home or building from termite attacks.

The Termite colony inside the access hatch had eaten the framework which had collapsed and fallen to the ground. Jay picked up a piece of what looked like perfectly good timber next to the large mud nest. The wood crumbled at the slightest poke of his finger. When he squeezed it, the wood fell apart. He pointed out a mud shelter tube leading up the corner of the block wall.

“So, just because you can’t see termites on the outside, doesn’t mean they’re not there, and if you’ve got a suspended slab garage similar to this one, I suggest you put some thought into what might be underneath. And for a few hundred bucks, cut an access hatch and have a look. It’s what you can’t see, is the scary part.”

If you notice any mud shelter tubes on your property inside or out, you should have a pest inspection. If you see swarming white ants and think you might have an infestation of termites, it’s time you had a pest inspection of your Geelong home, company offices, or other business premises. Don’t put it off. Call us at Acacia Pest Control immediately on 1300257774 or email us at info@acaciapestcontrol.com.au and arrange for a regular inspection to keep your property safe from termite attack.